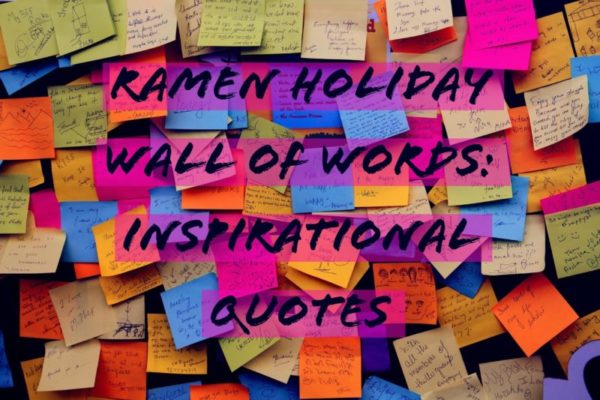 I love being inspired and I love inspiring others. This page is dedicated to being inspired by great words of wisdom and some quotes that will give you a good laugh. The point is, there’s no way you can scan below and not find your smile!

♫”Clouds come floating into my life, no longer to carry rain or usher storm, but to add color to my sunset sky.” – Rabindranath Tagore

♫“I see myself as a huge fiery comet, a shooting star. Everyone stops, points up and gasps ‘Oh look at that!’ Then- whoosh, and I’m gone…and they’ll never see anything like it ever again… and they won’t be able to forget me- ever.” –Jim Morrison

♫“If personality is an unbroken series of successful gestures, then there was something gorgeous about him, some heightened sensitivity to the promises of life, as if he were related to one of those intricate machines that register earthquakes ten thousand miles away. This responsiveness had nothing to do with that flabby impressionability which is dignified under the name of the ‘creative temperament.’— it was an extraordinary gift for hope, a romantic readiness such as I have never found in any other person and which it is not likely I shall ever find again.” – F. Scott Fitzgerald, The Great Gatsby

♫”If only we could see the endless string of consequences that result from our smallest actions. But we can’t know better until knowing better is useless.” – John Green, Looking for Alaska

♫”Everyone wants to live on top of the mountain, but all the happiness and growth occurs while you’re climbing it.” – Andy Rooney

♫“For some moments in life there are no words.” –Willy Wonka & the Chocolate Factory (1971)

♫“your life is your life/ don’t let it be clubbed into dank submission.” – Charles Bukowski, “The Laughing Heart”

♫“you can’t beat death,/ but you can beat death in life, sometimes.” – Charles Bukowski, “The Laughing Heart”

♫ “Wherever you go, go with all your heart.” – Wordsmith Unknown

♫ “A fool and his money are soon parted.” – Will Rogers

♫ “Nothing is impossible, the word itself says I’m possible.” – Audrey Hepburn

♫ “The best thing in life is to hold on to each other.” – Audrey Hepburn

♫ “I have come to the conclusion that one useless man is a disgrace, that two become a law firm, and that three or more become a congress.”- John Adams

♫“And by the way, everything in life is writable about if you have the outgoing guts to do it, and the imagination to improvise. The worst enemy to creativity is self-doubt.” ― Sylvia Plath, The Unabridged Journals of Sylvia Plath

♫“I was once afraid of people saying ‘Who does she think is she?’ Now I have the courage to stay and say ‘This is who I am.’” ― Oprah Winfrey

SAM: “I know. It’s all wrong. By rights we shouldn’t even be here. But we are. It’s like in the great stories, Mr. Frodo. The ones that really mattered. Full of darkness and danger, they were. And sometimes you didn’t want to know the end. Because how could the end be happy? How could the world go back to the way it was when so much bad had happened? But in the end, it’s only a passing thing, this shadow. Even darkness must pass. A new day will come. And when the sun shines it will shine out the clearer. Those were the stories that stayed with you. That meant something, even if you were too small to understand why. But I think, Mr. Frodo, I do understand. I know now. Folk in those stories had lots of chances of turning back, only they didn’t. They kept going. Because they were holding on to something.”

FRODO: “What are we holding onto, Sam?”

SAM: “That there’s some good in this world, Mr. Frodo… and it’s worth fighting for.”

♫ “What you’ve just said is one of the most insanely idiotic things I have ever heard. At no point in your rambling, incoherent response were you even close to anything that could be considered a rational thought. Everyone in this room is now dumber for having listened to it. I award you no points, and may God have mercy on your soul.” – Billy Madison (1995)

♫ “He’s more myself than I am. Whatever our souls are made of, his and mine are the same.”-  Emily Brontë, Wuthering Heights

♫ “I’m not afraid of death; I just don’t want to be there when it happens.” – Woody Allen

♫ “Never put off till tomorrow what may be done day after tomorrow just as well.” – Mark Twain

♫ “So, I guess we are who we are for a lot of reasons. And maybe we’ll never know most of them. But even if we don’t have the power to choose where we come from, we can still choose where we go from there. We can still do things. And we can try to feel okay about them.”- Stephen Chbosky, The Perks of Being a Wallflower

♫ “We are not enemies, but friends. We must not be enemies. Though passion may have strained, it must not break our bonds of affection. The mystic chords of memory will swell when again touched, as surely they will be, by the better angels of our nature.” – American History X

♫ “Well, I believe in the soul, the cock, the pussy, the small of a woman’s back, the hanging curve ball, high fiber, good scotch, that the novels of Susan Sontag are self-indulgent, overrated crap. I believe Lee Harvey Oswald acted alone. I believe there ought to be a constitutional amendment outlawing Astroturf and the designated hitter. I believe in the sweet spot, soft-core pornography, opening your presents Christmas morning rather than Christmas Eve and I believe in long, slow, deep, soft, wet kisses that last three days.” – Crash Davis, Bull Durham

♫  “Every dreamer knows that it is entirely possible to be homesick for a place you’ve never been to, perhaps more homesick than for familiar ground.” – Judith Thurman

♫ “People say I make strange choices, but they’re not strange for me. My sickness is that I’m fascinated by human behavior, by what’s underneath the surface, by the worlds inside people.” -Johnny Depp